The Art of Structure 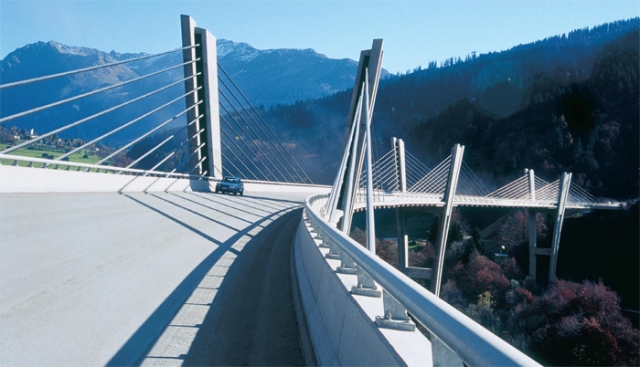 I believe engineering can (and should) be inspiring, inventive and beautiful. So I knew that part of my Thanksgiving trip to Pittsburgh would have to be spent at the Carnegie Museum of Art to see the dual exhibition: The Art of Structural Design: A Swiss Legacy and Félix Candela: Engineer, Builder, Structural Artist.

This is an exhibition that celebrates the grace and elegance of Swiss engineering and the mathematical geometry of Felix Candela. Both parts of the exhibition consisted of white concept models and pictures of the structures completed.

What would any of this have to do with Textile Smithing? I’m glad you asked.

First, lets go back to my ongoing statement that roads are non-woven textiles made of asphalt and concrete. The Swiss engineers of this exhibition prove how beautifully you can move that ribbon through the air by hanging it from 2 inch thick steel strings or supporting it on graceful arches. I love the way the Swiss invest in the beauty of the structures that are going to interrupt their landscape, as if they have to earn the right to be there by being graceful.

What really captured my imagination at this show were the roof structures of Heinz Isler and Felix Candela.

Heinz Isler’s models immediately caught my attention because I knew these buildings are textiles, inverted. His buildings take the idea of Gaudi’s chain models one step further by taking a plane of fabric and suspending it, then saturating it with plaster to preserve the form. Turned upside down, with gravity inverted, it becomes a roof. Simple and graceful, these roofs seem to hover over the space they protect.

Felix Candela, on the other hand, creates roofs from repeated elements. What struck me is that he builds architectural patterns. He builds mathematical forms that use strict complex geometry to describe his curved planes.

(The exhibition also had a clever display of Candela’s parabolic curves projected through the case’s veneers, which we spent some time arguing about where the projection was coming from) His warehouses are quite striking; they are repeated square umbrellas connected to form a roof. They take the interior of a mundane building and transform it into an abstract tree canopy.

Where Isler’s roofs have a naturalness about them, Candela’s have a strictness of form, but they both use the planar arch to defy gravity in a surprising way.

Also on display were many of the engineer’s notebooks, which were all meticulous and methodical. I tried sneaking pictures but I think security was on to my need to document…

Art of Structure is at the Carnegie Museum of Art until January 17th.

2 Responses to The Art of Structure