I’m jealous of Tomas Saraceno’s work. Its true. His installations of molecular dream-scapes made of bungie cords and rope make me want to drop everything, stock up on screw-eyes and cord and go to town out in my studio making impossible spaces. 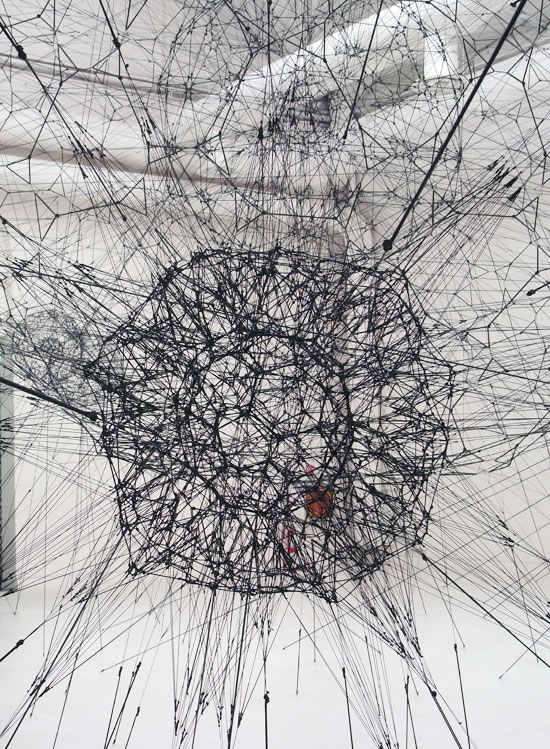 Here’s some art-speak words from his recent installation in New York:

Tanya Bonakdar Gallery is very pleased to present Tomas Saraceno’s third major solo exhibition of new work at the gallery, Clouds Cities Connectome. His visionary project promotes the construction of an alternate means of co-habitation, one that literally rises above contemporary debates often politicized by borderlines and national identity. Saraceno defies natural restrictions on what we currently perceive social habitat to be, and proposes a more sustainable and renewable global territory that will rise up in the sky to be borne on the winds. While exploring alternative means of intercultural, international and interdisciplinary space, his architecture of connectivity provokes engagement between individuals while underscoring a mutual interdependence on sustainable natural resources.

and then later says:

Following in a tradition of visionary architects before him; including Buckminster Fuller, fellow Argentinian Gyula Kosice, the Archigram group, and Yona Friedman, whose “Mobile Architecture” of the 1950s proposed dwellings with designs “decided on by the occupant,” Saraceno’s Cloud City is a vision for a more ecologically sustainable aerial territory created by a new global community. The possibility of populating the air with his vision of fluidly mobile metropolises is not merely fantastic fiction. Saraceno has actively worked towards realizing the goal of practical solutions to overcrowding on the earth’s surface. The exhibition features work that serves as a starting point for this dialogue, a conceptual framework emphasizing all points of interconnection.

That was a mouthful, huh? (I sometimes think that when an architect is referred to as ‘visionary’, it means ‘too far out there to be practical’.) What I first saw when confronted by these images was an exploded view of a neural network, a space out of ‘Fantastic Voyage’, less so a modern homage to Buckminster Fuller suspended in the air. That subtext does give me a bit more to chew on, and makes me think that perhaps his work is an attempt to realize a part of Italo Calvino’s Invisible Cities.

[Thanks to Warren for the images!]